Looking for a quick overview on Twitter Advertising? Check out our getting started post. There are a couple ways to run ads on Twitter advertising - Promoted Tweets and Promoted Accounts.

This is the best method to drive traffic to products, landing pages, products, and blogs. Using promoted tweets you can put relevant messages in front of the users you are targeting. You are able to promote existing tweets or create new tweets to promote. When promoting tweets you can also choose to only show them to new users if you want. You can set the tweet as "Promoted Only" so it is not delivered to your followers and is suppressed from your profile. If you promote a new standard tweet it will enter your public stream immediately. Promoted tweets will show up at the top of related search results and on home timelines for users in the segment you are targeting. 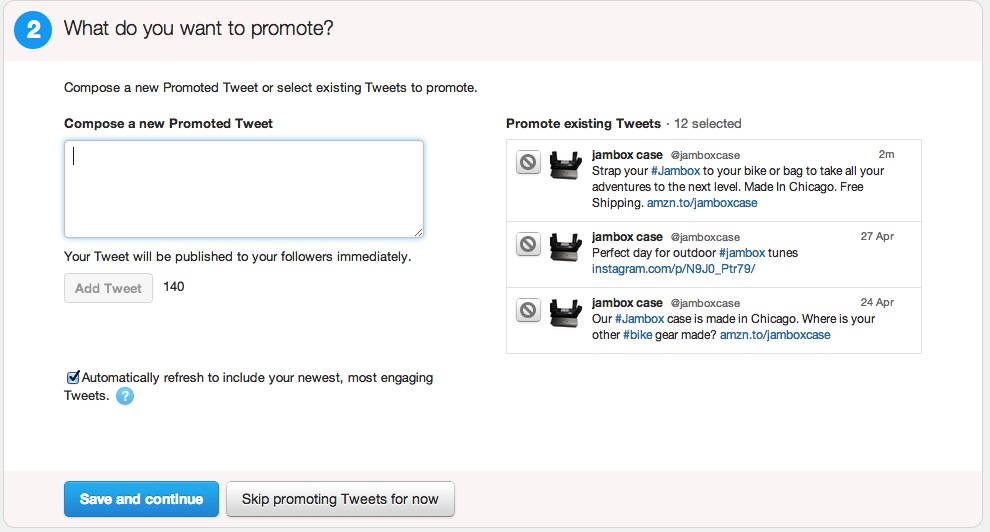 The other way to use Twitter advertising is via Promoted Accounts. Rather than trying to drive traffic to your product or landing page using promoted accounts allows you to build a relationship with new users on Twitter. This advertising widget shows up in a few places on Twitter allowing new users you target to follow your account. Promoted accounts show up on the "Who to follow" widget and on the "Home" and "Connect" tabs. They will also show up in search results and sometimes on the "Similar To You" widget on you profile.

Do you have a question on promoted accounts or promoted tweets? Let us know in the comments!